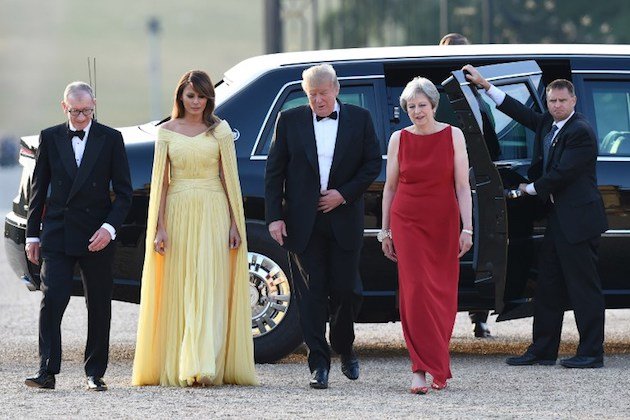 Trump said the U.S. is committed to a “phenomenal trade deal” with Britain as the country prepares to leave the European Union, he saw “no limitations” on future intelligence sharing despite disagreements over the threat posed by China tech giant Huawei, and he praised outgoing British leader May saying she has “done a very good job.”

Thousands of demonstrators have thronged central London to protest the American leaders’ visit. But when asked Tuesday about his reaction to the demonstrations, the U.S. president said he saw only a single small protest and media reports of much larger crowds are “fake news.”

Prime Minister May praised the relationship between the two countries, but acknowledged some differences over climate change and Iran. Britain still supports the Paris Climate accord, which Trump has rejected, and supports the Iran nuclear agreement that the U.S. has withdrawn from.

May spoke days before she is scheduled to resign after failing to secure a deal to complete Britain’s exit from the EU. That process will be inherited by her successor, with no clear path to a resolution among sharply divided parties.

Trump, who has publicly backed former Foreign Minister Boris Johnson, predicted an agreement for Britain to leave the EU “will happen and that it should happen.”

The U.S. leader described opposition Labour leader Jeremy Corbyn, who has been critical of Trump, as a “negative force” and said he would not meet with him during his Britain visit. Trump also renewed his criticism of London Mayor Sadiq Khan, who wrote in The Observer newspaper that welcoming Trump for a state visit is “un-British.”

Earlier, at a business roundtable event, Trump said he thinks the U.S. and Britain will reach a “very, very substantial trade deal” that is “very fair.”

May said Britain and the United States could expand their economic partnership with a bilateral trade deal and that her government believes in “keeping markets free, fair and open.”

Trump has pursued new trade arrangements with a number of major U.S. trade partners, including China, with a stated goal of making terms more friendly to the United States.

Later in the day, Trump and his wife Melania were scheduled to have dinner with Prince Charles and his wife, Camilla, Duchess of Cornwall.